How to Make It in America by Patryk Slodzinski, NBS Communications

Patryk, an account executive at NBS Communications, in Warsaw, Poland, and a member of the first class of the participants in the PRWA Exchange programme, shares his thoughts on the programme and the time he spent at Feintuch Communications in New York City and Stanton Communications in Washington D.C. at the beginning of this year.

When I first learned about the PR World Alliance’s exchange programme I was instantly sold on the idea. Despite a pretty fair deal of time spent living abroad, I had pretty limited experience of exchanges, Erasmus student exchange being the most notable I ever participated probably, but I’ve always found such opportunities alluring.

At NBS, I am usually involved in projects with a strong Public Affairs component, and although I am very much engaged in those issues and find that part of the job really interesting, I was curious about broader PR practices. NBS is pretty open organization and I am often asking around to learn more about what else we are doing, however our strong IR pedigree makes it a specific place, not an archetype of the industry at large. I realized that the exchange could serve as a good occasion to look beyond all that limitations. 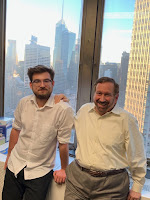 I submitted the eleventh-hour application and the next thing I knew I was crossing the Atlantic. I’ve picked the United States as I imagined that there couldn’t be a public relations market, in the PRWA network, more different to Polish one than the American. The public relations industry did not develop in Poland until the early nineties, with NBS dating back to 1990 considered as one of the founding fathers of the industry, whereas modern PR in the US has been present since the beginning of the century.

As for many before me, my first step on the American soil was New York City, where Henry Feintuch hosted me for a week at Feintuch Communications. Henry set me up at hip place at heart of Williamsburg so every day I had a proper NY millennial experience with a morning commute to Manhattan and constant nagging at the L-train delays, topped with a great deal of after-hours fun in ever-changing Brooklyn.

Work-wise, I’ve came just after the Consumer Electronics Show in Las Vegas, an important event for technology-oriented Feintuch Communications. The aftermath turned out to be “an extremely quiet period”, per Henry’s estimation. However, that allowed me to have more time to talk and discuss with Henry and his team. We often exchanged information and opinions on how both our firms worked, identifying the areas of similarity and comparing differences between the market realities in Poland and the U.S.

The other advantage of that relative lack of pressure, was that it made room for more casual socializing with Henry and his staff and made a great combination with Henry’s hospitable attitude. Henry was an amazing host that eagerly carved some of his after-hours time to hang around Brooklyn, get an after-hours drink or see a Broadway show.

In terms of the programme’s objectives I’ve been regularly invited to client meetings and internal brain storming sessions, where I could contribute as well. Even if I didn’t know the client, or the industry that well it was genuinely interesting and informative as Henry and his staff were really forthcoming and frank in those exchanges. On my own I was able to do stuff I mostly don’t do at home which was really refreshing such as pitching journalist for the upcoming trade show in Amsterdam. The next stop was D.C. where I’ve spent another week with Peter Stanton and his team. The general framework was kind of similar. I could get involved in practically anything that was in the pipeline, with my engagement ranging, from just observing, a kind of fly on the wall arrangement to full participation, according to my preference.

Coming to Washington I had also bit of a different goal in mind, as I’ve imagined that D.C. could be a great place to observe some of the best practices from my particular turf – Public Affairs. And even if Stanton Communications did not have any on-going project in this field my conversations with Peter allowed me to get a fair deal of quality insight.

During my time across the pond, both Peter, Henry and their respective teams have been equally open, candid and willing to share their know-how and opinions with me while I was involved in many projects at various stages. Thanks to that sensibly loose structure I was able to have a broad perspective and see many aspects of the PR profession I am not exposed in my daily routine. On the other hand, the workload made it possible to stay in the loop with the developments back at NBS, and whenever I felt I need it catch up with some assignments there I was free to do so.

I highly recommend participating in the programme, I came back with a different, wider perspective and many fresh ideas I hope to implement at home.
Posted by Henry Feintuch 1 comment: