A New Kind of City 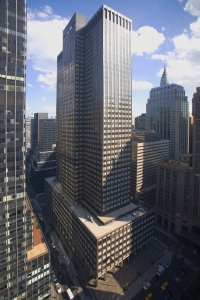 As a native San Franciscan, I assumed my transition to New York would be relatively easy. I grew up going to the city often, well-acquainted with the multitude of people, high-rise buildings and active public transportation systems. City life has truly never been a stranger to me. However, for the last three years I have been living in Dallas and studying public relations and strategic communications at Southern Methodist University.

While Dallas is still very much a city, there are many notable differences when comparing it to metropolises such as New York and San Francisco. In Dallas, everything goes at a slower pace: business, nightlife, even speech patterns. The people also have a southern charm I have unknowingly adopted and have come to expect in most day-to-day interactions. In short, my first few days in New York have been shocking.

Although I've visited many times, the sheer scale of New York City never ceases to amaze me. The amount of people here makes it feel as if during the day everyone is stacked on top of each other in sky high buildings until breaks in business hours where people in suits flood the streets and filter into one of the seemingly millions of restaurants and bars. On top of all the working people, I've noticed that for each person rushing to get to work there is a touring family of five strolling down any given street taking in the scenery. This pedestrian traffic often doubles or triples my projected 10-minute walk to our Park Avenue office.

Since arriving in New York, I have enjoyed the walkability of this city. I find myself walking on average six miles a day without even realizing it. Typically, I Uber everywhere, so this is a huge change of pace for me. Walking so much has inspired me to start running again. Upon visiting Central Park, I find it interesting that a city this dense has preserved a huge piece of natural real estate amid shops, apartment buildings and commercial buildings that have taken over this city. I also appreciate how the park sits in the center of the city as opposed to other cosmopolitan areas, such as Dallas, where the only scenic, open areas are a 20-minute drive outside of the city. There is something to be said about a place where you can run through the hills and the trees and then across the street for a donut.

By the end of each day, I'm so tired. New York produces a new kind of exhaustion for me; it's not your end-of-the-day weariness, but head-to-toe fatigue from walking, running, working and socializing all over Manhattan in a single day. For “the city that never sleeps,” I don't know how anyone can stay up past 10 p.m.!

In just a few short weeks, I have started to adjust to this new way of life. In my first few days I thought New Yorkers were unusually abrasive, but after adjusting, I have come to realize that the lack of outward charm says more about New York's culture rather than its residents’ attitudes. I've come to accept that people here are just more in their own heads, trying to get from one place to another without slowing down or interrupting the thoughts and lives of the people around them. But while New Yorkers seem more closed-off and poker-faced than the cities I’m used to, I have learned that everyone here is just as friendly as other parts of the country, but they certainly do not go out of their way to show it.

Even though I still have plenty of adjusting to do, I can already see this summer will be transformational for me. I will be learning so much and working hard while running around and exploring this great city. I can't think of anything I would rather be doing during my last summer before graduation next year!
Posted by Allison Nichols No comments: