Nothing screams perfect summer nights more than a ball game at Yankee Stadium.  With perfect weather, a buffet of burgers, hot dogs, and popcorn and great seats right along the first-base line, PRSA-NY’s annual summer social held this year on July 22 was a huge success.  But the hot dog buffet wasn’t even the most exciting part of the night.  Lucky PRSA-NY members had the exclusive opportunity to attend a briefing and meet Jason Zillo, the executive director of media for the New York Yankees.
The entire press room went silent as Mr. Zillo took the stand because in a room full of public relations professionals, this guy is truly a PR superstar.  Mr. Zillo shared some personal insight into the beginning of his PR career, how he ended up working with the Yankees and what rising PR professionals should know.

So how exactly did this seasoned PR veteran get to where he is today?  After graduating from Ohio University in the mid ‘90s, he held two internships with the Orlando Magic and Detroit Pistons before joining the Yankees as an intern in 1996.  He worked extremely hard for 11 years in the communications department before he was named to his current position in 2007.  There were (and still are) early mornings, late nights and work on the weekends.  It’s nonstop work, but very rewarding.

Without giving away too many of the Yankee’s trade secrets, Mr. Zillo gave some great insight on what it’s like to work in sports PR.
On the other hand, he also gave us the cold, hard truth about the reality of getting to and being in the position he is in today.  “With just $140 in my bank account,” Mr. Zillo said jokingly, he made his way down to the Orlando Magic for the first of his two unpaid internships with sports franchises.  He knew no one, had nowhere to live and was about to make no money but he had a passion for the industry.  Even to this day, he loves what he does and never looks at the clock.

His best advice to those of us starting out was that internships are essential.  He made it clear that he wouldn’t consider anyone that hasn’t interned for him in the past.

Mr. Zillo took the stage for about an hour but it seemed he only scraped the top of his responsibilities
as director of media.  He is a busy, busy man and PRSA-NY appreciates and thanks Mr. Zillo for taking the time out of his schedule to give us a look into the sports PR world.  And to round out the night, the Yankees defeated the Orioles 4-3!

Posted by Unknown No comments:

Public Relations Through the Eyes of an Intern

Since beginning my summer internship here at the end of May, I have learned more about the public relations industry than in my three years as a public relations student.  I’m not saying that my university has not prepared me well for this industry, but there are so many aspects in this field that I simply could not have learned in a classroom setting.

Fully immersing oneself is the best way to learn.  Observing client meetings, drafting client documents, watching my drafts go through rounds of copyediting, building media databases, and other tasks, have all contributed to a much-needed agency experience.  I thought I knew most of the responsibilities that public relations professionals do on a day-to-day basis – but boy was I wrong.

“People-skills” are a huge characteristic that every PR person needs.  Public relations is not a strictly desk and computer job.  We are constantly interacting with clients and media and the professional language is something I can only learn through experience and practice.  Learning how to professionally communicate is not something that a professor can teach you, but rather, it’s something that I have started to pick up while observing my coworkers and have begun practicing on a daily basis.

Public relations is strategic.  You can’t just randomly throw anything at the media and hope for successful coverage.  There is a date and time and place for every press release, media blast, launch announcement, proactive campaign, etc.  We are always trying to succeed for our clients and, therefore, a lot of planning, editing, and strategizing goes on behind the scenes to make sure everything is perfect.

Although, I can’t say that everything I’ve done since the start of my internship has been perfect.  It’s actually been anything but that.  I’ve made mistakes and have experienced times when I am extremely confused, but isn’t learning the point of an internship?  I have built upon my mess-ups, incorporated feedback given and applied these things to my later work. 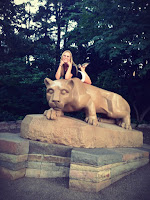 Ask questions.  This is easily the most important thing that I have learned.  I’ve quickly come to the realization that I don’t know everything there is to public relations and there is still so much to learn.  So as I’m entering the home stretch of my internship, I need  to learn as much as possible from my colleagues before I actually enter the “real world” upon graduation from Penn State University next May.
Posted by Unknown No comments: