Finally, the F.A.A. has caught up with air passenger reality. 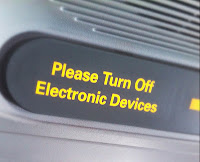 You know that silly edict about "please turn off all electronic devices that have a switch" that made the entire flying public either closet criminals, plain bored or impotent and docile sheep reconciled to putting our short-term health and well-being...and independence... into the hands of our flight stewards.

It's been a sort of an open joke among road warriors and flight crews that Kindles, noise cancelling headseats, tablets and even active games of Word with Friends (yes that game, Alec Baldwin) have never been implicated in a flying emergency (let alone something more dreaded).  In truth, it helped the cabin crew to establish "control" over its passengers and perhaps saved a few bumps on the head due to flying electronics if an aircraft hit turbulence. Nothing more.

Most of us complied, begrudgingly, even as we played a cat and mouse game of using our devices for a few extra seconds before the flight steward came by and either softly....or not so gingerly...requested compliance.  And how many of us have sat near someone who chose to simply ignore the protocol and do their electronic thing regardless.  Or ever been on a flight where someone, who may not know how to shut off their phone, had their phone ring during ascent?  Ooops....

But that all changed last Friday when the FAA said the rules -- they are a changing.

That's when Marketplace Reporter Dan Gorenstein interviewed our client Jonathan Spira, editorial director of Frequent Business Traveler, to help interpret the new ruling. After their interview, Jonathan (in a PR turnabout), suggested that Dan interview his "agency" head since he too was a fellow frequent traveler who he knew broke out into hives at the mere suggestion of unplugging.

The new policy will go into effect later this year after an FAA advisory group weighs in and the policy is formally changed. What won't change? No cell voice calls on planes -- at least during this round.

Probably a good thing for most passengers who prefer whatever privacy/quality/quiet time remains during flying to cutting the cord.

What's your experience? Ever break the rules during take-off and landing  to read an e-book, don your headset or play a game? Should voice calls remain off-limits (even MetroNorth now has a quiet car each train ride in or out of New York City where you can't even THINK of answering or placing a cell call)?

I'll chill on the point..and celebrate a small victory for productivity and individual rights.  Now to start lobbying for the return of that little bag of peanuts on board!

Posted by Henry Feintuch No comments:

I’ve had lots of different internship experiences in my three post-high school years. I interned for the morning show at 103.5 KTU here in New York; I handled marketing strategies at a startup that made financial mobile apps; and I worked for Congresswoman Carolyn B. Maloney (NY-12)
down in Washington, DC.

Although most people might link the marketing experience with my current PR internship at Feintuch Communications, my internship with Congresswoman Maloney was actually the most similar to what I’m doing now. From the view of an intern who had many press and writing-related tasks on the Hill, and who is now working at a full-fledged communications and PR firm, there are many similarities in both tasks and mindsets between doing political press and working in private sector press relations.

There are certainly differences as well, but I will save those for a later date. From what I’ve learned so far, here are the top similarities between government press operations and a PR firm’s operations:

Michael Mallon is the 2013 Summer Intern for Feintuch Communications. He attends Cornell University, class of 2014.
Posted by Michael Mallon 1 comment: