The Forbidden Dance - B2B & Social Media (Warning: This blog post has nothing to do with the Lambada!)

Earlier this month during Internet Week in NYC, our very own Henry Feintuch organized a PRSA-NY panel discussion on how to get B2B companies to embrace social media.

To view all of the videos on the panel discussion, search YouTube for "PRSA-NY: The Forbidden Dance? B2B and Social Media."
Posted by Unknown 1 comment:

Footie? Soccer? No, It's A PR Opportunity! 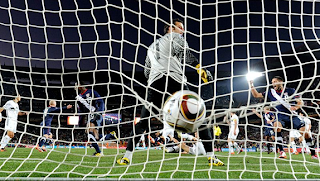 PR is EVERYWHERE! Even in South Africa at the FIFA World Cup (that’s the football – soccer for us Americans- world championship held every four years). And this year’s cup is a potential PR extravaganza!

If you’ve been living under a rock, the United States side rallied to come back from a 2-0 deficit against Slovenia on June 17th, and appeared to have scored a third goal for the win in the last five minutes of the match. Mr. Coulibaly was the referee of the match and disallowed the potentially winning goal based on a mysterious off-sides call that has yet to be confirmed or the culprit identified.

So where’s the PR? Well, first, that most people reading this blog are aware of the situation means that basically, as several ESPN commentators put it, Mr. Coulibaly did more for soccer/football in the US in one match than ANYONE had accomplished in the last 100 years. Americans are now tuning into the World Cup in increased numbers, if nothing else, to lend their support to the U.S. side and cheer them on as they attempt to make the quarter final round (see the double-header on June 23). If this doesn’t demonstrate the power of a word of mouth campaign, I’m not sure what does. I hope Adidas, Puma, and Nike are paying close attention. The window’s closing on that news cycle, so you’d better get moving.

Now that’s not to say that there haven’t been some interesting attempts at viral marketing and other PR stunts at the Cup, despite rules that prevent any companies who have not paid for advertising to do any promotions. In fact, two women wearing short orange skirts trying to do some guerilla marketing were arrested as they were promoting a Dutch beer (much to the annoyance of Cup sponsor Budweiser). FIFA gets the difference; they just want to make sure they control the message for their sponsors.

Secondly, I’m afraid Mr. Coulibaly and FIFA are going to need a little crisis counseling. You can’t disallow a beautifully executed goal by one of the world’s leading economies who are considered an underdog in a potentially pivotal match and not have to answer a few questions from the media. While FIFA is currently protecting Mr. Coulibaly, and actions are expected to be taken to prevent him from being the primary referee in any future matches, he’s going to need some messaging help.

Now if we could just meet the guy who invented the vuvuzela...